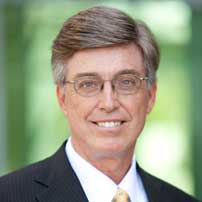 Board Of Trustees Chair

Gary L. Crocker is a self-made man, a nationally recognized entrepreneur, and a man with a deep conviction to serve mankind. He also has served as chairman of the Utah Youth Village for the past 25 years.

He is president and managing director of Crocker Ventures LLC., a privately-held life science investment firm that funds biotechnology and medical device companies. Crocker also currently serves as chairman of the board of both Nexus Orthopedics and publicly traded Merrimack Pharmaceutical, which he joined as a board member in 2005.

Crocker founded Research Medical, a manufacturer and marketer of specialty cardiac catheters and related medical devices used in open heart surgeries. Forbes recognized the business as one of “America’s Best 200 Small Growth Companies” for six consecutive years, and it generated more than 20 percent average annual growth in sales and earnings. After 14 years, Crocker sold the firm in 1997 to Baxter International’s Edwards Life Science division in a $236 million acquisition, hailed at the time as the largest medical device merger in Utah history.

Prior to launching Research Medical, Crocker was vice president of business development and director of marketing for Sorenson Research; he negotiated the 1980 sale of the firm to Abbott Laboratories. He also served as an internal strategic analyst for Baxter International.

He has held senior leadership positions with several other life science companies, including serving as board chairman for ARUP Laboratories, co-founder and director of Theratech Inc., and as a director of Interleuken Genetics Inc., LineaGen Genetics and The Med-Design Corporation. Crocker also served as a member of the Federal Reserve Branch of San Francisco board from 1999 to 2007.

Crocker currently serves as the chairperson of the University of Utah’s Center for Medical Innovation and on the boards of the Sorenson Legacy Foundation and Utah Symphony/Utah Opera.

Gary Crocker was named Utah Entrepreneur of the Year by both Ernst & Young and the MountainWest Capital Network.

Gary received an honorary doctorate degree from the University of Utah in May of 2019.

Gary is also a member of the President’s Leadership Council at Brigham Young University, in which he played a pivotal role both as a major donor and as a volunteer leader in their recent capital campaign.

He also served as President of the Board for the Utah Opera Company, where he introduced their highly successful Med Night. He is a former trustee of the Deseret Foundation’s Heart-Lung Research Institute.